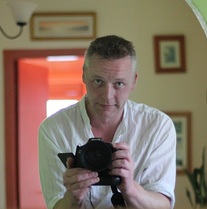 Bio: Raised by his parents Kenneth and Penelope with his brother Carl in Berkshire & Oxfordshire in the United Kingdom. He has lived and worked across all parts of the UK. Simon has two children Jonathan and Christopher and he resides in Lancashire with his partner Liz and her family.

Previously a website owner and forum administrator; Simon operated a number crunching website before condensing the results of his 5 years of analysis into his first book “How do I win on a lottery?”

Simon has turned his hand back to a passion that began in 2001; the art of writing suspense thrillers. In 2013 he completed his first in a series; “Stray Bullet” based on the fictitious characters of Harvey Walters and Jack Shaw.

Currently he uses his spare time to work on the sequel to “Stray Bullet” aptly named “Phoenix” after the leading character within his latest book.

Simon gains his inspiration through life experience; having worked within the UK Royal Air Force and latterly working within and managing civilian operational control rooms which he continues to do to this day.